The roots of woke ideology (explained by Francesco Erario)

In recent years, there has been increasing debate about the effects of political correctness in Western societies, as well as its evolution in phenomena such as woke thinking and cancel culture.

Generally, many progressives tend to deny or trivialize the extent of such phenomena, but in the long run the facts show that they should not be underestimated. Until recently, it would have been unthinkable that, as happened in Canada, a university research project would have been refused state funds because the team of researchers was not inclusive enough toward minorities (and this despite the fact that the team leader was an Indian). Or that an animated series like "Dragon Ball" would have been censored in Spain and Argentina because accused of sexism.

But how did it all come about? What are the historical, social and cultural roots of such a disturbing phenomenon? The person who has tried to give an answer is Francesco Erario, also known to readers of this site. Erario devoted to the topic his first book, Woke. The Birth of a New Ideology, published by Idrovolante Edizioni. 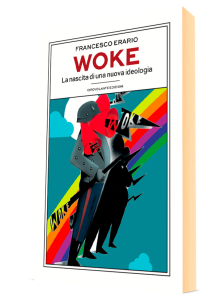 Especially in the early chapters, Erario draws heavily on an essay, Cynical theories, by two English-speaking authors, Helen Pluckrose and James Lindsay. As French thinker Pascal Bruckner had already pointed out in his Un coupable presque parfait, the two aforementioned authors also point out that these phenomena's forerunners are not to be found in English-speaking countries, but rather in France. Here, since the 1960s, philosophers such as Foucault, Deleuze and Derrida have essentially tried to propagate the idea that there are no objective, universal truths, and that reality as we understand it is only a social construction to be - precisely - deconstructed.

In this context, even the scientific method takes a back seat, as it is seen as any cultural approach. And at the point when there is no longer any universally valid knowledge, the idea that the categories with which we view the world are the product of a privileged class, which will later be identified with the straight white male, comes to the fore.

Another cultural root of woke ideology goes back to the Frankfurt School, originally Marxist-inspired and of which many representatives left Germany in the 1930s to emigrate to the United States after the rise of Nazism. They developed a theory critical of empirical evidence-based knowledge as associated with bourgeois and capitalist society, going so far as to criticize even Enlightenment philosophy and the very foundations of Western civilization. All these theories would be a source of inspiration first for the youth protests of the 1968 movement and later for "social justice" theorists. Incidentally, precisely one of the Frankfurt School's leading figures, Herbert Marcuse, was also one of the first theorists of the breaking down of boundaries in sexuality.

One of the main movements that arose in the wake of these trends of thought in the United States was Critical Race Theory (CRT). It arose in the 1970s, almost taking over from the civil rights movement of the previous decade, and was originally related primarily to the legal sphere. At first it theorized that the American legal system continued to discriminate against blacks in an underhand way, even after racial segregation had been abolished. From there it extended as well to other categories, particularly other ethnic and religious minorities and women and homosexuals.

In this way, it has come to be theorized that the entire legal system and the world of education are inherently racist against nonwhites. As Richard Delgado and Jean Stefancic wrote verbatim in their book Critical Race Theory. An Introduction, the ultimate goal of this movement is to "challenge the very foundations of the liberal order, including equality theory, legal reasoning, Enlightenment rationalism, and the neutral principles of constitutional law."

This leads to the development of concepts such as "white privilege" and "whiteness," whereby those born white are automatically more privileged than those who are not, in any context, regardless of whether they are billionaires or members of the working class. According to CRT theorists, as long as this supposed white privilege continues to exist, minorities will continue to live in an inherently racist system.

Since scientific evidence is no longer considered a universally valid truth, this has cleared all those theories that see the male and female sexes as externally imposed social constructs rather than biological reality. In particular, philosopher Judith Butler has theorized that the body is but matter devoid of any intrinsic meaning, and this is also true of the two sexes. Although these theories are blatantly at odds with empirical evidence, they have proselytized a great deal first in academic circles and later in other branches of society.

On the subversive and in some ways anarchic scope of Gender Studies, it is enough to quote from Sara Garbagnoli, an Italian sociologist working in France as a gender researcher at Université Paris 8, whose words leave no room for misunderstanding: "Gender Studies are subversive studies, bearers of a revolution that touches the categories of perception through which Society thinks about the sexual order, its divisions, its relations."

Although this drift in Italy still lags behind English-speaking countries and France, there is no shortage of signs of its advancement: just think of the attempts to introduce the asterisk or schwa in writing, which in some cases has even taken root in important academic and cultural institutions (despite some resistance from the Accademia della Crusca). However, forms of opposition are also present; evidence of this is the rejection of the Zan Bill in parliament or the constant failures in attempts to legalize Ius Soli.

Critical race theories have begun to come to Italy later in part because, until the end of the Cold War, Italy did not have the multiculturalism present in the United States. Immigrants from former colonies were not coming to us en masse as was the case in the United Kingdom and France. On the other hand, the study of the crimes committed by Italians during the colonial times in Africa and fascism is becoming increasingly popular in Italy. However, Italians in these studies tend to be seen as an ambiguous category: on the one hand full-fledged white Europeans, on the other hand those who emigrated to the United States over a century ago and were excluded for a long time (like the Irish or Jews) from the privileges ascribed to WASP (White Anglo-Saxon Protestant) society.

In short, Francesco Erario's book offers a comprehensive description of how the woke ideology was born and how it has evolved over time. However, the final part, namely what can be done to stop this drift, is missing. Toward the end, although the author does not make it clear, reading between the lines it emerges what the key to opposing it might be: the culture industry, which two Frankfurt thinkers, Adorno and Horkheimer (not to mention Gramsci), already thought was essential to seize power. Conservatives will only be able to counter woke and cancel culture and restore the right order in society if they begin to take this industry seriously, getting rid once and for all of the idea that "with culture you can't eat."