Energy sovereignty according to Francesco Giubilei

The current war and the issues surrounding Russian gas have highlighted, if ever there was a need, how essential it is for a country to have as much control as possible over its energy resources or, if it does not have deposits on its own territory, to diversify its suppliers rather than depend on just one. This is what conservative editor and columnist Francesco Giubilei's latest essay, Sovranità energetica. Dagli errori della transizione ecologica alla guerra in Ucraina ("Energy Sovereignty. From the Mistakes of the Ecological Transition to the War in Ukraine"), published by Historica/Giubilei Regnani, is about.

How many mistakes Italy has made on energy

In addressing the issue, Giubilei begins by highlighting what he believes have been the main mistakes Italy has made over the years with regard to energy policies. In particular, he takes up the theses of economist and former Minister of Industry Alberto Clò, according to whom our country began to phase out coal-fired power plants, and fossil fuels more generally, too quickly. Giubilei does not object to the goal itself of the ecological transition, but to the way it has been implemented, which he says would have required a more gradual process. To the point that Draghi decided as early as Feb. 25, albeit on an emergency basis, to temporarily reopen some coal-fired power plants and increase production to deal with the energy crisis.

Another topic discussed is nuclear energy, opposed by many but considered by others as the best solution to meet both economic and environmental needs. Giubilei points the finger at the "no" votes in the 1987 and 2011 nuclear referendums, which he says prevented us from seizing opportunities that would have been crucial in the current situation. One result would be an excessive dependence on foreign energy, which in Italy stands at 75 percent against an EU average of 59 percent. Natural gas accounts for 41 percent of all the energy we use, and of that, 95.6 percent was imported from abroad when the war in Ukraine broke out. 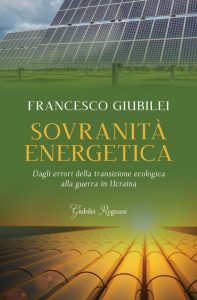 The European Union would not be blameless either, according to Giubilei. Again, it is not a question of "what" it wanted to do (i.e., reduce CO2 emissions) but "how." In fact, despite the fact that from 1990 to 2019 EU countries reduced their emissions by 24 percent (with the goal of reaching zero by 2050), in the same time frame those globally increased from just over 20 billion tons per year to over 33. This is because Europe produces only 8 percent of all emissions on a global scale, and counts for little compared to much more polluting nations such as the United States, China and India. The latter two in particular, being emerging economies that have discovered economic prosperity relatively recently, tend to be much less concerned than Westerners about the effects of the pollution they produce.

Prior to this book, the author had already expressed in his 2020 essay Preserving Nature the idea that the environment should also be protected in order to show attachment to one's land, but without harming the economy and especially by offering alternatives to far-left environmentalism.

How to fix it

Having reached this point, one wonders what the practical solutions might be to overcome the energy crisis. In this regard, Giubilei makes a series of proposals that can be divided mainly into two macro-areas: short-term choices, temporary solutions to deal with rising energy costs in the immediate term; and medium-to- long-term choices, which require a certain level of planning and will yield good results only several years from now.

With regard to the energy sources available in Italy, geothermal sources should be taken into account in addition to solar and wind energy: one example is given of Larderello, a hamlet in the municipality of Pomarance in the province of Pisa, in which there is a 4800 GWh geothermal well, which alone produces 10 percent of the world's geothermal energy.

In summary, these are the main solutions the author proposes:

The last chapter of the book addresses the energy issue from a historical perspective, but in a way that reconnects with current events. Giubilei sees in Enrico Mattei, whose 60th passing anniversary falls on October 27 this year, the man who put great industrial skills at the service of the country. When he was at the helm of ENI, he put Italy's national interest first and foremost and took care to ensure a certain quality of life for its workers, primarily with the creation in the 1950s of the Metanopoli district in San Donato Milanese.

In conclusion, Energy Sovereignty is a book that serves to alert us to the challenges now and those to come, but it also tries to offer insights into seeing the light at the end of the tunnel. The problems related to rising energy prices, although serious, are not insurmountable. With the right combination of intellect and willpower, and by learning from past mistakes, we can hope sooner or later to emerge from this crisis.

As Mattei put it: "You must have confidence in yourself, in your possibilities, in your tomorrow; you must form this tomorrow yourself.".