A new book on Boris Johnson

All the great British leaders, when they seemed to be on the crest of a wave, have then seen their careers end abruptly: despite having won the war, Churchill was soon after defeated by Labour; Thatcher fell because of internal attacks on the conservative front over differences on Europe; and Tony Blair, after leading the country for a decade, is eventually remembered mainly for having uncritically followed Bush in the war in Iraq. In this wake also seems to fit the current PM Boris Johnson who, after being the protagonist of the Brexit and Prime Minister since 2019, now faces one scandal after another.

But who is Boris Johnson really? What led him to govern the United Kingdom in such a delicate phase of its history, between the exit from the EU and the pandemic? How much does his policy represent a break with the past and how much, on the contrary, is it a return to old traditions? Journalist Daniele Meloni has tried to answer these and other questions in his first book, Boris Johnson. L’ascesa del leader conservatore e il Regno Unito post Brexit("Boris Johnson. The rise of the Conservative leader and the post-Brexit United Kingdom)", published by Historica.

Meloni, who covers English politics in particular for right-wing online publications such as "Atlantico Quotidiano" and "L'Occidentale" (and, conversely, Italian politics for the English site "Spiked", among the media of reference for the most convinced Brexiteers), outlines in four sections the historical, political and socio-economic context in which Johnson had to move, from the beginning of his career to the present day. Each section concludes with one or two appendices that summarize various names and dates to chronologically place all the major historical events that preceded Johnson's election and the Brexit.

The rise of the man from New York

Despite the fact that in recent years he has presented himself as the one who led the lower and middle classes of deep England against the cosmopolitan elites, in reality Johnson comes from the same world that he theoretically opposes: born in New York to a wealthy English family with very diverse ethnic origins, he studied at Oxford in the same years in which its students included David Cameron, the Prime Minister who lost the referendum on Brexit. Already at university between the two there was a certain rivalry, which almost thirty years later would involve an entire nation.

Later, the author illustrates the steps that led Johnson, after a successful career in journalism, to be elected first to parliament and then mayor of London. And already here Meloni adopts an approach at least partially objective: although in many pages transpires a sympathy not too veiled for "BoJo" (as he is often nicknamed), Meloni recognizes that already at the time of the first debates on Brexit Johnson has not adopted a consistent attitude, remaining for a long time rather vague on his positions, and then present himself as the standard-bearer of Leave and take sides against his own party leader. 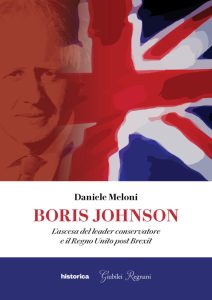 Another important aspect of the chapter concerns the beginning: it is explained how in the UK there has always been a strong current opposed to the process of European integration, as it saw the country as the heir to the Empire and, more generally, to a history different from that of the rest of the continent. A current that within the Conservative Party led to numerous internal feuds since Thatcher's times. On the opposite side, Labour has always struggled to adopt a univocal attitude on the European Union: although those of the City and the large urban centers were predominantly for Remain, the then leader Jeremy Corbyn could not represent them in a convinced way as heir of the old anti-capitalist left, which saw the EU as a union of businessmen and bankers and not of people.

Meloni goes on to describe the various prominent members of the Johnson government, among whom there has been an ongoing and abrupt turnover due to internal disagreements, which has posed a risk to the nation's stability at such a sensitive time in history.

A "sovereign" and "global" United Kingdom

Both supporters and opponents of Brexit have seen it as the former empire's attempt to make itself autonomous from the EU and be able to decide its own future. However, it would be a mistake to think that the decision to break away from Europe was made on the basis of pure isolationism or the illusion of being able to practice autarky. The goal of the Eurosceptics is not to isolate the UK from the rest of the world, but to leave a certain international order to enter another one more congenial to them.

There are several factors to take into account: the first is that, despite having detached from the EU, London still has the most important stock exchange on the continent, and is still among the most advanced cities in the world for investments in start-ups; therefore, there is the conviction that at least the City will not be particularly damaged economically.

Another issue concerns the fact that the country has always maintained a privileged relationship with the United States, and more generally with the former English-speaking colonies, so much so that Churchill already spoke of all these nations as one big family. In order to translate this historical and cultural bond on an economic and geopolitical level, Johnson wanted to revive the CANZUK project (Canada, Australia, New Zealand and the United Kingdom), to create an international entity alternative to the EU where the British would share a whole series of common interests with their former colonies. Shifting the center of gravity eastward, and specifically to the Pacific, would also have another goal: to confront China's advance in the region head-on, as Johnson understood that the Chinese dragon represents the great challenge of our time.

One archipelago, many nationalisms

English nationalism is not the only one to be dealt with: also Scots, Welsh and Irish over time have expressed the desire to mark their identity as different from that of the "Evil Albion", which has led on several occasions to autonomist claims that, in the case of the Irish, have resulted in the most heinous violence. So many stories that are resurfacing with force, since in 2016 Scotland and Northern Ireland voted predominantly to remain in Europe. Here Meloni perhaps overlooks Wales a bit, held in low regard as among the nations that make up the United Kingdom it is the one with the weakest secessionism. Yet, understanding more about the affairs of the Welsh people could have been interesting as well, especially to better understand what led this land to vote overwhelmingly in favor of Brexit on par with England.

The book describes the various institutions that govern Scotland and Northern Ireland, which have a degree of autonomy in areas such as health and education, while defense and foreign policy are handled by the central government in London. The roots of their secessionist movements are also discussed. Here a clarification must first be made, of which not everyone in Italy is aware: in Europe not all parties that claim the autonomy of non-independent national or ethnic entities fall into the right wing area. The old Lega Nord was and the Flemish nationalists are in Belgium, but in the British Isles things are different: the Scottish National Party, as well as Sinn Féin in Ireland, has long been placed on the left, so much so that over the years it has adopted many social democratic positions on issues such as the environment, welfare and LGBT rights.

The reasons that push Scotland to want to claim more autonomy are not only ideological: in the North Sea there are huge oil fields, considered strategic for the Scottish economy despite the fact that it is converting to renewable sources. Another geopolitically relevant issue is the fact that Scotland hosts military bases where numerous submarines equipped with nuclear missiles are maintained. In the event of Scotland's separation from the rest of the country, they would find themselves torn between the desire of the Left in power to erase the presence of nuclear weapons and the repercussions that this choice would have in the event of their probable entry into NATO.

The fight against covid

Johnson's policy on vaccines and restrictions has changed frequently over time: from an initial approach of not imposing restrictions, he moved to heavy lockdowns after he himself became infected and seriously risked his life. From the beginning he tried to solve the situation by focusing on the production of vaccines within the borders of the country, especially through the British "AstraZeneca". In this situation, the Brexit was an advantage, as having autonomy in decision-making allowed him to act more quickly and firmly than the EU, which proceeded more slowly due to a slow and inefficient bureaucracy.

Daniele Meloni's is not just a book about Boris Johnson; it is a compelling portrait of the UK's past and future challenges. With a wealth of data and descriptions, complex issues are made understandable to even the most inexperienced readers, who will find a compass to help them navigate issues that will continue to be of critical importance in the coming years, not only for the country itself, but for the world.