Would China be able to conquer Taiwan?

Does one war lead to another?

Putin's invasion of Ukraine, among the dozens of geopolitical consequences it generated, also prompted a spontaneous question: what if China, taking advantage of the West's distraction, attempted a snap invasion of Taiwan in order to crown its 70-year dream of Marxist conquest of the "rebellious" island?

The question in itself is legitimate, for three reasons.
First, Beijing in recent months has only increased its military provocations and verbal threats beyond the limits of diplomatic bullying. Second, if a Chinese blitzkrieg against Taipei were to be successful, it is clear that the West would not intervene to implement a war of liberation, but would take the field if Taiwanese resistance proves prolonged enough. This is because, ugly to say but true, Taiwan is more important to the United States than Ukraine itself. The third reason is that Xi Jinping's leadership appears (not necessarily that it really is) to be less firm both domestically and abroad than it was last year, and history teaches (most recently just in Ukraine) that dictators in domestic crisis are the most bombastic.

But is a snap takeover of Taiwan by the Armed Forces of Communist China really possible? Or would the required huge amphibious and air-sea operation turn out to be a bloodbath preliminary to the decisive intervention of the U.S. and its huge alliance in the Indo-Pacific (stretching from Japan to India via Australia and South Korea)? To answer this question we must analyze the geography of the potential battlefield and the military availabilities of the two "Chinas" (as officially and with less and less conviction Taiwan proclaims itself the legitimate heir to the Sun Yat-sen and Chang Kai-shek Republic of China government). 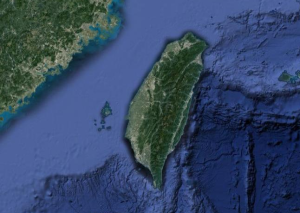 Let's start with the territory. Taiwan has an area of 36,197 square kilometers (for comparison, Sicily has 25,832). Two-thirds of the island is mountainous, while the remaining flat third faces mainland China. This is unfortunate, however, even in the flat area the areas suitable for a mass landing are limited, since much of the coast is urbanized and because opposite the southern part is the small Penghu/Pescadores Islands archipelago, a fortified porcupine that would be too dangerous for a Chinese invasion force from that sector to leave behind. As an alternative to conquering them, the Chinese should attempt to land only in the northern part, thus reducing the front of attack to just the part of Taiwan where the mountains come closest to the west coast. Of course, the potential landing areas are a carpet of anti-tank, anti-personnel and anti-ship mines.

Other small archipelagos over which the Taipei flag flies are the Quemoy Islands (which in some places are less than five kilometers from Red China territory), Matsu (less than ten kilometers from the mainland) and Wuqiu (about 17 kilometers from the enemy). These three archipelagos have two characteristics: they form a kind of fan that from north to south guards all realistic approach routes to Taiwan, and, needless to say, they are equipped with considerable garrisons and fortifications. In short, an invasion by the Beijing Armed Forces would have to obtrudely first capture at least two of these outposts, presumably the central and northern ones.

How a Chinese invasion would take place

The feat in itself would be feasible, but at the cost of heavy losses and with the very serious hitch of losing the surprise effect against the primary target, thus giving time for an American and allied intervention.

Assuming these initial obstacles were conquered or unpredictably bypassed, Beijing's forces would have to cross the Taiwan Strait, which separates the island from the mainland. We are talking about a relatively stormy arm of sea that measures 70 nautical miles (130 kilometers) at its narrowest point. For comparison's sake, the Strait of Dover, which Hitler's army could not cross, divides Britain from the mainland by just over 17 nautical miles (32 kilometers). In the Taiwan Strait the tides, a phenomenon that should always be taken into account in amphibious operations, can exceed four meters, while the depth is almost never more than 150 meters. The latter figure is a major advantage for the defenders, as it would allow numerous small submarines or underwater drones to perch on the bottom (becoming difficult to detect with sonar), from which to take the invading fleet by surprise.

Let us now imagine that the hypothetical Chinese invasion force has conquered or bypassed the small "shield islands" and crossed the Strait, obviously after heavy losses. Ahead of the Red China combatants would lie the ultimate prize: the island of Taiwan. And here the going would get really tough. As we have seen, the coast facing Asia is flat but largely urbanized. This would greatly reduce landing zones, as World War II has already shown that a landing conducted directly against a port leads to the massacre of the attackers (think Dieppe), while the Russian invasion of Ukraine is showing the world the effectiveness of portable anti-tank weapons in urban combat. But more limited landing zones, in turn, bring with them a serious disadvantage, namely the over-concentration of the invasion force, which would allow Taiwanese defenders to fire "in the heap," with disastrous consequences.

If even these bottlenecks were successfully overcome by the Chinese (and at this point the losses would really begin to be worrisome) Beijing's forces would have to conquer the western part of Taiwan, where the main cities are located. These would be transformed by Chang Kai-shek's heirs into a giant Stalingrad, which would force China to choose between two equally losing options: conquer them by assault, at a military and social cost not sustainable even for the Yellow Dragon, or raze them to the ground with all kinds of conventional bombardment. The second option would save the lives of many soldiers, but would also have a high material cost, would be an international propaganda disaster to make the martyrdom of Mariupol look like a picnic, would give plenty of time for the United States to intervene, and, most importantly, would allow the surviving Taiwanese forces to deploy as best they could among the mountains covering two-thirds of the island.

Does China have the numbers to conquer Taiwan?

Let us now turn to the analysis of the opposing forces, always imagining that the first phase of the conflict (the initial assault) is limited to China and Taiwan. This is because it is obvious that a U.S. intervention (supported to varying degrees by Australia, Canada, Japan, South Korea, New Zealand, Britain, the Philippines, and perhaps India and Vietnam) would have the same effect on the communist regime in Beijing as the Opium Wars had on the Manchu dynasty.

Communist China, having a population of 1,412,600,000, has about 4,015,000 trained active and reservist personnel (source: International Institute for Strategic Studies). Probably the actual numbers are a bit higher, without considering the fact that with such a mass of population China has infinite reserve potential. We emphasize potential because in today's warfare an untrained soldier is just cannon fodder and because Chinese society is also no longer willing to suffer the losses sustained in the Korean War: the era of human waves against Western firepower is over for them as well.

A landing operation against Taiwan would therefore require the deployment of almost all trained troops, supported by as many reserves of doubtful combat value and necessitating an immense logistical apparatus. The deployment of such a large number of men and means would represent a heavy cost on the Chinese economy, which has seen better times, and would cause the crucial surprise effect to fail. Indeed, we must remember that the amphibious operation par excellence, the Normandy Landings, enjoyed relative tactical surprise. To achieve it, the Allies' planning and diversionary operations were mastodontic. Today none of this is possible, since with satellites Taiwan and its friends can track the movements of individual ships and tanks. Therefore, Beijing's forces would be destined to come up against a defense that is ready for them and that to be overwhelmed (in light of the factors we have already seen) would have to be in a state of numerical inferiority of at least ten to one: numbers that Beijing is unable to muster and launch in an amphibious campaign.

For the overlords of the Forbidden City, things are better in the aeronaval field, as the navy and air force enjoy a clear numerical superiority over the Taiwanese (350 naval units of all types versus 117 and more than 3,370 air assets versus 600, respectively). Historically, China's huge numbers were largely offset by the Taiwanese's better Western technology, but in this field Beijing by dint of investment has partially closed the gap.

Faced with this disadvantage Taiwan has developed three strategies over the years: importing higher-tech weapons from the West, creating its own good military industry to reduce dependence on foreign aid, and devising the "porcupine strategy." The latter, also referred to as the "bubble," involves concentrating Taipei's air and sea forces around the island, operating in concert with land-based anti-aircraft and anti-ship defenses. This would force the invaders' planes to operate over or close to enemy territory, resulting in them also having to watch out for fire from the ground and losing their own pilots who had been ejected by parachute, who would be taken prisoner, while Taiwanese pilots who had jumped over the motherland would be rescued. The combination of these factors make the "porcupine" or "bubble" strategy similar to the one by which the British managed to edge out during the Battle of Britain, despite being outnumbered.

We conclude our analysis with Taiwan's ground forces. With a population of 23,452,000 behind it, the Nationalist China Army and Marine Corps has about 165,000 soldiers, to which 1,657,000 reservists would be added if needed. These are excellently trained and armed troops, highly motivated and led by well-trained officers. In the event of a communist invasion 1,822,000 fighters would have all the geographical, technological and tactical advantages we have seen. Therefore, it is not absurd to say that Beijing, to defeat them reasonably quickly, would have to attack with at least five million soldiers, which China is currently unable to transport unharmed across the Taiwan Strait, which in turn would require a logistical train three times their number. Figures that are currently excessive even for the Yellow Dragon that if, by some miracle, they were assembled anyway would meet with probable defeat and a certain bloodbath.

Summary: For the time being, and hopefully for much longer, Taiwan remains too tough a cookie for China.