The interview with PIETRO DE LEO

Third government crisis in the legislature, at a very difficult time for Italy grappling with so many challenges: the Russian-Ukrainian conflict, inflation, high energy prices, the tax burden. Italy once again hangs on the wills of parties that can no longer govern and work together. On Wednesday Draghi will appear before the Parliament and what will happen? Will he seek a vote of confidence or will he confirm his resignation "because the pact of trust underlying government action has broken down"'? And what will the majority and opposition parties do? Will they seek an early vote or will they do all they can to reach the natural end of the legislature? But again, what are Conte's moves and why trigger a government crisis right now?

In the new episode of "The Interview," SILVIA ROBERTO meets PIETRO DE LEO, journalist for "Il Tempo," to take stock of the situation and understand what the possible scenarios are between now and Wednesday and on a possible post-Draghi scenario. 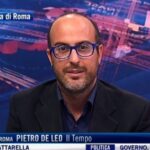