The most commonly used phrase when it comes to innovation, in all fields, in this nation is: "Italy is a country for old men," a notion that hides a bitter truth.

Recently, another European record has been announced, but the reaction is not as joyful as the victory of Mancini's national team in July, but the brutal awareness of a sad first place regarding the "Neet", young people between 16 and 29 years old who do not study and do not work, which has grown to 30.7% in 2021.

Called "bamboccioni", "choosy", "spoiled" (and in some occasions rightly so), the Italian "youth" are victims of a state system that, in fact, does not work. The question therefore is one: we complain about politicians who aim at the next elections but not at the next generation, but how, in concrete terms, is it possible to reverse the trend?

Here are five useful ideas and proposals for getting out of the quagmire.

The school, together with the family and the social context, is a point of enormous importance for the formation of the individual, but already from this it is possible to glimpse the first cracks.

The inadequacy of schooling in finding future employment is a big issue. In many countries, for example, they have adopted frequent aptitude tests to be able to assess the student's abilities and build around him a course of instruction suited to his needs and abilities, as opposed to what happens today where the old frontal and standardized teaching does not emphasize the respective characteristics, but aims to homogenize the class.

The system is inefficient for two reasons. Individual skills are not valued and expressed, so the student will consider it appropriate to abandon the entire course of study (the phenomenon of school dropout is increasing), with disastrous consequences in psychological and social terms. Secondly, a general unpreparedness of the individual to withstand the inevitable pressure of the labor market. Therefore, through preventive evaluations and ad hoc didactic and training systems, it is possible to contrast these two sad phenomena and contribute to the creation of a qualified and prepared human capital.

Make the youth aware of their importance in the community

Civic activism towards one's own country is synonymous with a solid civic conscience and useful for the formation of aware citizens and not subjects, as required by the standards of liberal democracy (as opposed to other regimes). Therefore: we should encourage voluntary entry into the armed forces, civil service or other institutions responsible for vocational training and the beginning of a working phase, for a service of social utility towards the Nation for 12-18 months for young people between 18 and 21 years who do not undertake a university career or work in companies, thus generating income and awareness of their means.

Incentivize youth employment by cutting taxes to entrepreneurs who hire under 35. The cost of labor in Italy is well above the European average, unemployment and undeclared work are made real Moloch by the immense bureaucracy and the weight of taxes that the employer is forced to support, so you favor vicious circles like those just mentioned for survival needs. The State, paraphrasing Reagan, in this case becomes the problem and only through taxation that is close to the needs of the citizen is it possible to demolish sensibly unemployed and non-legal workforce. The Citizenship Income ("Reddito di Cittadinanza") bestowed on age groups capable of training and work has been, in some ways, a stagnation of the condition and, worse still, a justification for the helplessness of these individuals.

Encouraging youth enterprise through lower taxation for the first few years of operation would make it easier for young entrepreneurs to invest and generate additional jobs and market innovation.

From spectator to actor: the daily work of institutions

The last analysis concerns Local Authorities. The restoration of territorial constituencies in the municipalities would bring many people, including young people, disinterested - and rightly so very often - from the dynamics of local politics, making them return to take care of their neighborhoods and be the first conscious custodians. The implementation of the rules on the aforementioned Income to occupy the receivers in professional figures such as "auxiliaries of public green" or start training courses and webinars that allow the integration of skills that make the young attractive for the labor market and the promotion of civil service. 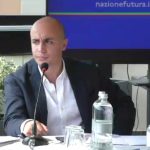 Political consultant and professional in the marketing sector, he is author for various online newspapers and territorial coordinator of "Nazione Futura" in Taranto.