Lenin was a bloodthirsty dictator. As much and more than Mussolini

When the Ministry of Economic Development displayed on its interior the portraits of all those who have served as ministers, the presence among them of Benito Mussolini immediately aroused heated controversy from the Left. In particular, former minister Pier Luigi Bersani of the Democratic Party (for decades a member of the Italian Communist Party) has called for the removal of his own portrait so as not to share the same wall with the late Duce of Fascism. In no time, however, photos of a recent rally in which Bersani spoke in front of a portrait of Lenin appeared on the Internet.

The reader is invited to view the comments to the above tweet for an illustration of how the Left is defending "comrade" Bersani: that is, by fully absolving "comrade" Lenin. How? By denying, on the strength of their ignorance, that Lenin was ever guilty of any crime. Arrogants, they go so far as to suggest that the others are confusing him with Stalin - thus revealing one of the cornerstones of semi-cultured thinking, carefully inculcated for decades by communist or post-communist school teachers: namely, that in Communism's history there is only that small stain, represented by Stalinism, on the absolute whiteness of the good intentions and excellent deeds of Marxism-Leninism.

It is a colossal hoax, of course. And in the following lines we shall see how all the crimes of which Mussolini was guilty were also committed by Lenin (with a tenfold increase in victims). The position of those who would condemn the Italian dictator but absolve the Soviet one is thus made untenable.

In 1922, with the March on Rome, Benito Mussolini had the post of head of government handed to him. Within a few years, a government obtained by force turned into an outright dictatorial regime.

Lenin and his Bolsheviks, contrary to what many homegrown semi-cultured people believe, did not make the October Revolution against the tsarist autocracy. The Tsar had already abdicated after the February Revolution, giving way to a provisional government that proclaimed a republic and convened a Constituent Assembly. The Bolshevik coup d'état served to replace that provisional government and thus control the Assembly, where, however, the Communists - by choice of the popular vote - found themselves in the minority. At that point, the Bolsheviks forcibly dissolved the Assembly, igniting a civil war that claimed around 10 million lives, dead and wounded.

Not content with wiping out the democratically elected Assembly, Lenin did not even accept the response of the elections for his "Soviets" ("Councils") of workers and peasants. Here again, despite having outlawed the "bourgeois" parties and facing a suitable electorate, ballots counted, the Bolsheviks were outvoted by more moderate (Mensheviks) or non-Marxists (revolutionary socialists) socialists. Lenin's response was to dissolve the councils in which his people were in the minority. From then on, the election of the Soviets and the Congress of Soviets (the Soviet parliament) was constantly controlled and manipulated by the Bolsheviks, erasing any glimmer of democracy that was not merely formal.

Mussolini and the Fascists made extensive use of violence and repression against opponents. In addition to the notable murders (Matteotti, Rosselli, etc.), the regime created a special tribunal that in 20 years convicted more than 4,500 people and enforced 31 death sentences. In the tens of thousands were the opponents sent to prison or to confinement.

How, on the other hand, did Lenin treat his opponents? After seizing power, he unleashed the so-called "Red Terror," conducted by his political police, the Čeka. It was nothing but a continuation of the Czarist Ochrana; but while the latter could count on no more than 15,000 personnel, the "Chekists" numbered in the hundreds of thousands. The number of victims rose proportionally: in the four years that the Red Terror lasted, those killed were at least in the tens of thousands, more likely in the hundreds of thousands. Also well documented is the systematic use of torture and the frequent performance of atrocities: among the abominations attributed to Lenin's "praetorians" were crucifixions (usually reserved for religious people), impalements, burnings, skinnings, and other gruesome methods of making the killing of victims as painful as possible. Falling into the hands of the Čeka were not only active opponents, but also priests, draft dodgers and workers who could not meet the production quotas imposed by the Communists.

Lenin's role in the massacre is prominent. Not only did he unleash the Red Terror, but he actively stirred up the Čeka against the people. For example, we possess a cable from him dated August 11, 1918, addressed to the communist authorities in Penza where a peasant uprising against requisitions had recently been quelled, in which Lenin calls for, "Hang (absolutely hang, in full view of the people) not less than a hundred well-known landowners, fat cats and parasites." Historians have also ascertained that Lenin personally reviewed lists of intellectuals to be deported to Siberia.

Under fascism, concentration camps were opened as much in the national territory as in the colonies or areas occupied during the war.

In the USSR, it is to Lenin that we owe the opening, in April 1919, of concentration camps entrusted to a special administration, to which he gave the infamous acronym GULAG. Stalin merely inherited and expanded this system, devised and implemented by his predecessor. In the end, several million people would pass through the camps: at least one and a half million would never return (but since it was common practice to release prisoners when their condition became critical, some historians raise the estimate to as many as six million deaths). Although only a minority of casualties occurred under Lenin, tens of thousands of deportations took place under his command.

One of Mussolini's most heinous actions was the enactment of the racial laws, which basically targeted Jews. Outside national borders, the suppression of independence movements cost the lives of numerous Libyans, Ethiopians and Slavs.

Lenin, for his part, in 1922 ordered the killing of all priests considered hostile to Bolshevism: 20,000 fell victim to Čeka - mostly Orthodox popes, but not even Catholic priests and nuns, imams and rabbis escaped persecution. A large number of churches, synagogues and mosques were burned to the ground. Professing a religion exposed one to the risk of reprisal from an ideologically atheistic power.

Ethnically, Lenin's main victims were instead the Don and Kuban Cossacks. Particularly reluctant to accept the communist dictatorship, they were subjected to a bloody repression, which it is no exaggeration to describe as genocide: Lenin had perhaps as many as one-third of the 1.5 million Cossacks who inhabited the former tsarist empire killed.

If Mussolini is blamed for invading Ethiopia and then fielding Italy in World War II, Lenin cannot be considered a "pacifist" either. In addition to provoking and fighting a bloody civil war for control of Russia, Lenin pushed the Red Army to occupy other nations, formerly part of the Tsarist Empire but now made independent: this is particularly the case with Ukraine, forcibly brought back under Moscow's rule. Curious that at this very time, the same people who condemn the invasion ordered by Putin condone the same thing Lenin did in the past. The leader of the Russian Communists also managed to briefly occupy Estonia, Lithuania and Latvia: in all three countries he imposed a dictatorial and terrorist regime, with various massacres, before being driven out. 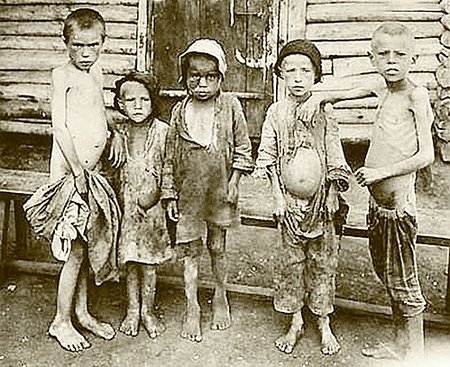 Russian children during the famine of 1921-22. Lenin ordered to continue with the requisitioning of grain for export.

Mussolini is accused of causing a famine in Greece during the occupation regime. Certainly Lenin presided over the very severe famine of 1920-21 and, according to all commentators (except for a few Communist weirdoes), handled the situation so badly (or wickedly) that it turned apocalyptic. Five million dead is the toll historians give of that famine. Lenin continued to demand onerous grain requisitions from the peasants, grain that was often used to be exported to replenish the Bolsheviks' coffers; he also delayed the arrival of humanitarian aid offered by the U.S. Not at all impressed by the carnage, Lenin (as stated in one of his letters to the Politburo) thought that this was a good opportunity to proceed with the expropriation of church property, because "only at a time of desperate hunger .... can we obtain the approval of the peasants."

Lenin was a ruthless and bloodthirsty dictator. Everything that can be blamed on Mussolini can also be blamed on him. While it is true that Lenin carried out his crimes in Russia and not in Italy, it is foolish to use this argument to justify following and defending him in our country. Is genocide condonable if it takes place far from our eyes? Particularly bizarre, then, that such "reasoning" comes from globalists who claim that borders do not exist and we are all "citizens of the world."

Ultimately, those who defend Lenin today either exhibit abysmal ignorance or are apologists for vast and heinous crimes and should be treated as such.