Putting the war back in its place

In its escape from complexity, the narrative surrounding the Russian-Ukrainian conflict can only reduce everything to immediacy and easy moral judgment on the act, expunged from any context, of the military attack against Ukraine. Putin's decision thus floats in a space-time vacuum, where history and geography lose depth and flatten out on the rhetoric of today: the figure of Hitler is superimposed on that of Putin; the attacked is Ukraine but it is also Italy, Europe, democracy or the world, because if Putin crosses the Dnepr then there is no doubt that the Cossacks will water their horses in the fountains of St. Peter's. It is, after all, natural to suspend a story in the void, if a void (cognitive and conoscitive) is also in the head of those who tell it.

This simplistic, paroxysmal and mystical vision cannot, therefore, but reject historical (as well as strategic) contextualization. Any deviation from the line is denounced as "putinism" (communist forma mentis).

However, at risk of appearing "deviationist" and "unorthodox", we will allow ourselves a brief historical digression. It is in fact necessary, for those who still have the insolence to want to understand, to recognize in the Russian-Ukrainian war also (if not above all) one of the many ethnic conflicts that have bloodied the former communist bloc territories following the collapse of the USSR and because of its legacy of "unresolved" borders.

A look at the map 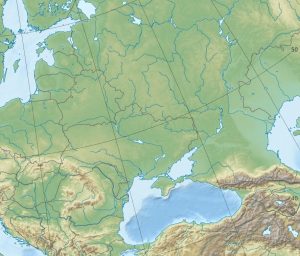 Any historical and geopolitical analysis should start from the observation of the map. In the case of Ukraine, a quick glance shows how the country is embedded in the wider Sarmatian Plain, which reaches up to the Urals. This means that while to the south and west the territory is more or less delimited by the Black Sea and the Carpathians, to the north and east there are no natural boundaries. In fact, throughout history, the lines of political demarcation have been extremely mobile along those lines.

The rivers partly made up for the lack of relief to the east of the Carpathians. But if the Dnester only strengthened the latter as a delimitation, and the Southern Bug was a major obstacle only in antiquity, it was the Dnepr that often served as a political dividing line.

Another important geographical feature is that the Ukrainian territory is traversed by the border between two biomes: forest (in the center-west) and steppe (in the southeast). Although this demarcation is less influential today, it was very so in past centuries. The Eurasian steppe is a vast prairie that runs from Mongolia to the Carpathians: a semi-arid expanse of grass but without trees, historically unsuitable for agriculture and therefore inhabited by shepherds, necessarily nomadic. People born and raised on horseback, where every man was also a warrior, capable in the difficult art of shooting arrows moving on the steed. Until half a century ago, they were invincible on their natural terrain - the steppe - although they rarely succeeded in establishing lasting domination outside of it.

For many centuries there were three mobile borders in Ukraine: that of the Western Slavs, that of the Eastern Slavs and that of the nomadic "Turanian" peoples. Thus, with reference to different areas or zones of that territory, it was often used the term Oukraina - Okraina - Ukraina, which according to the most accredited etymology means precisely "border land". This frequent use ended up making the whole region the "borderland" par excellence; in the nineteenth century, while the national self-consciousness of what most people still called Malaja Rus' (" Little Russia") was asserting itself, "Ukraine" and "Ukrainians" became the names of a new historical subjectivity.

Prior to that time, the distinction between the Russias (Greater, White, and Little) was less clear. The Rus' ("Rusia" in Latin), which arose in Eastern Europe in the ninth century, had its political center in Kiev but included several principalities: from Galicia and Volinia in the west to Novgorod in the north, from Minsk to Moscow. It was the arrival of the Mongols that caused the decline of Kiev (sacked in 1240), the progressive rise of Moscow and the inclusion of Galicia and Volonia - after about a century of independence - in the Polish-Lithuanian state structure. For centuries, Moscow and Warsaw would contend for the great East-European plain, making Catholic and Orthodox Christianity fight - through them - as well.

In 1654 the Cossacks (peasants who escaped from serfdom to create a free and military state) of the Dnepr recognized, in Pereyaslav, the authority of the Moscow Tsar to get help against the Poles. In 1686 the Eternal Peace (an unfortunate choice of name) fixed the border, roughly, at the Dnepr. One hundred years later, between 1772 and 1795, Poland was divided between Austria, Germany and Russia, giving to the latter the whole of today's Ukraine with the significant exception of Galicia and Volonia, which were assigned to Vienna. In the same decades, the Ukrainian steppe was taken from the Ottomans manu militari by the Russian Empire: it was the object of an intense work of repopulation and named Novorossiya, "New Russia".

Birth of a Nation

It is important to note that, until then, "Ukraine" had remained a geographical expression. Administratively it was, like the rest of the czarist possessions, divided into several governorates. The Ukrainian language had existed for centuries, but it was considered a dialect of the common people and could not claim a vast literary tradition. It was at the turn of the 18th and 19th centuries that modern Ukrainian developed; and it was in the 19th century that, while Moscow tried to curb its spread with restrictive measures, it was rediscovered by the local elite who, under the converging influence of Romanticism and Liberalism (fascinated by the relative Cossack egalitarianism), began to think of Ukraine as a nation in its own right - although often linked to Russia by Pan-Slavic or Russophile sentiments.

When revolution broke out in the Russian Empire in 1917 and the Tsar was deposed, an autonomous but not independent Central Council (Rada) was formed in Ukraine, with authority over the central-western part of the present Ukrainian state. After the October Revolution, which transferred power to the Bolsheviks, a self-proclaimed Republic of Ukraine extended its jurisdiction over the southeastern part of the current Ukrainian state, with the significant exception of Crimea. Then began years of tribulation, characterized by the Peace of Brest-Litovsk and the Russian Civil War: Ukraine changed hands, from the Menshevik independentists to Germany, from Russia to Poland, from the Whites to the "Greens". Finally, in 1922 the Ukrainian Soviet Socialist Republic was integrated into the USSR, with borders roughly corresponding to the current ones. They were supplemented by Soviet expansion during World War II and, in 1954, by the incorporation of Crimea as a gift on the three hundredth anniversary of the Treaty of Pereyaslav.

The cession of Crimea was decided by Nikita Chrushchev, secretary of the PCUS who had grown up in Ukraine and for several years at the head of the Ukrainian Communist Party. Because if Ukraine had much to suffer from the communist regime (think of the terrible Holodomor, perpetrated as part of the dekulakization of the '30s), it also expressed leading protagonists. In addition to Chrushchev, Stalin's successor, even the next secretary of the PCUS, who remained in power for twenty years, was Ukrainian: Leonid Brezhnev. Ethnically Ukrainian on one parent's side were Konstantin Chernenko and Mikhail Gorbachev, the last rulers of the USSR before its disintegration. Even outside the highest level of leaders, one can find several Ukrainians who have marked Soviet history, for better or worse: physicist Abram Ioffe, space engineer Sergei Korolev, artist Kazimir Malevich, biologist Trofim Lysenko, chemist Vladimir Vernadsky, and many others.

The boundaries of discord 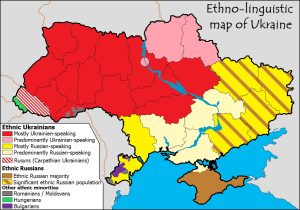 When Ukraine became independent after the collapse of the USSR, it did so with the legal borders inherited from the Soviet Union and with the internal ones, invisible but "heavy", inherited from its long history. Thus, if in the west of the country, with the exception of the provinces with large Hungarian or Moldavian minorities, Ukrainian is the first language for almost all the inhabitants (the data are those of the 2001 census, the only one available, carried out a decade after independence), moving towards the south and east the percentages drop, even below 50% in Donbass, in the province of Odessa and in Crimea (where only 10% are native Ukrainians). Where Ukrainian speakers decrease, Russian speakers increase proportionally (although the phenomenon of surzhik, an intermediate and informal language, should never be overlooked).

This fault line, which follows the historical and geographical ones mentioned above, has turned into politics. It is enough to retrace the major elections of these thirty years of independence to find a rather repetitive pattern: with the center-west voting for nationalist (or at least Europeanist) parties and the southeast for Russophile parties (or those protecting ethno-linguistic minorities).

It will be objected that in many other countries similar electoral patterns exist, without affecting democratic stability. True: but generally in those other countries these are contingent divisions, or linked to phenomena whose span covers one or two generations at most. In the case of Ukraine, on the other hand, many differences - political, ethnic, linguistic, historical, geographical - insist simultaneously on the same line of demarcation: each one is a knife blade that cuts; adding up all the incisions forms a deep cleavage. The two revolutions of 2004-05 and 2013-14, the secessions of 2014, the long low-intensity conflict in the Donbass, and today's Russian invasion make this clear to us definitively.

At the base of the present Russian-Ukrainian war there is not the madness of one man, but the recrudescence of an ethnic conflict whose roots are deeply buried in the soil of history.

The return of history

I trust that the reader, who has followed me this far, understands that this historical reconstruction has not been a display of dates or notions for its own sake. Understanding the historicity of the Russian-Ukrainian war should serve as a warning. A reminder to understand the times we live in. Superficial and gullible people can well relegate everything to the madness and wickedness of a single man, Vladimir Putin. In doing so, however, they will behave like those who, on the slopes of a volcano, do not know how to recognize in the telluric tremors, in the fracture of the ground or in the increase of fumaroles the imminence of an eruption.

In fact, we are witnessing history knocking at our door. History is returning to Europe, but Europe does not yet appear ready to return to history. If it doesn't succeed as soon as possible, it will be overwhelmed and will become a land of conquest and colonization for more aware and vital peoples.

Founder and President of Centro Studi Machiavelli. Graduated in Historical Sciences (University of Milan) and PhD in Political Studies (Sapienza University), he is professor of "History and doctrine of jihadism" and "Geopolitics of the Middle East" at Cusano University. From 2018 to 2019 he was Special Advisor on Immigration and Terrorism to the Undersecretary of Foreign Affairs Guglielmo Picchi. His latest book (written with Stefano Graziosi) is Trump contro tutti. L'America (e l'Occidente) al bivio.