Situation on the ground

Russia has not yet achieved the military objectives it planned. The main task (effort or direction in military terminology) was to reach the capital Kiev and take control of it. The Russian Armed Forces have encountered unexpected problems with the speed of their advance into Ukrainian territory; at this moment they are almost stationary in the vicinity of the city, they are spreading out and would be ready to begin a semi-static activity of encirclement similar to an ancient siege. They are encircling the capital leaving open, for now, only one railroad channel in and out and one humanitarian corridor out to the west.

Further objectives have been achieved in other areas of the country, particularly in the South. These include the conquest of key cities such as Mariupol (from which many road links depart, including especially those to the two separatist republics of Lugansk and Donetsk). Even if the conquest of Odessa is still missing, the Russian forces are creating a territorial continuity from Crimea to Donbass and the final goal is to control the whole coastal strip on the Black Sea. In this way they would block any commercial connection by sea to Ukraine and achieve territorial continuity with the Russian-speaking region of Transnistria, already garrisoned since a long time by Moscow troops. From some reports it seems that the Ukrainians have mined the waters in front of the port of Odessa to prevent navigation in the area. 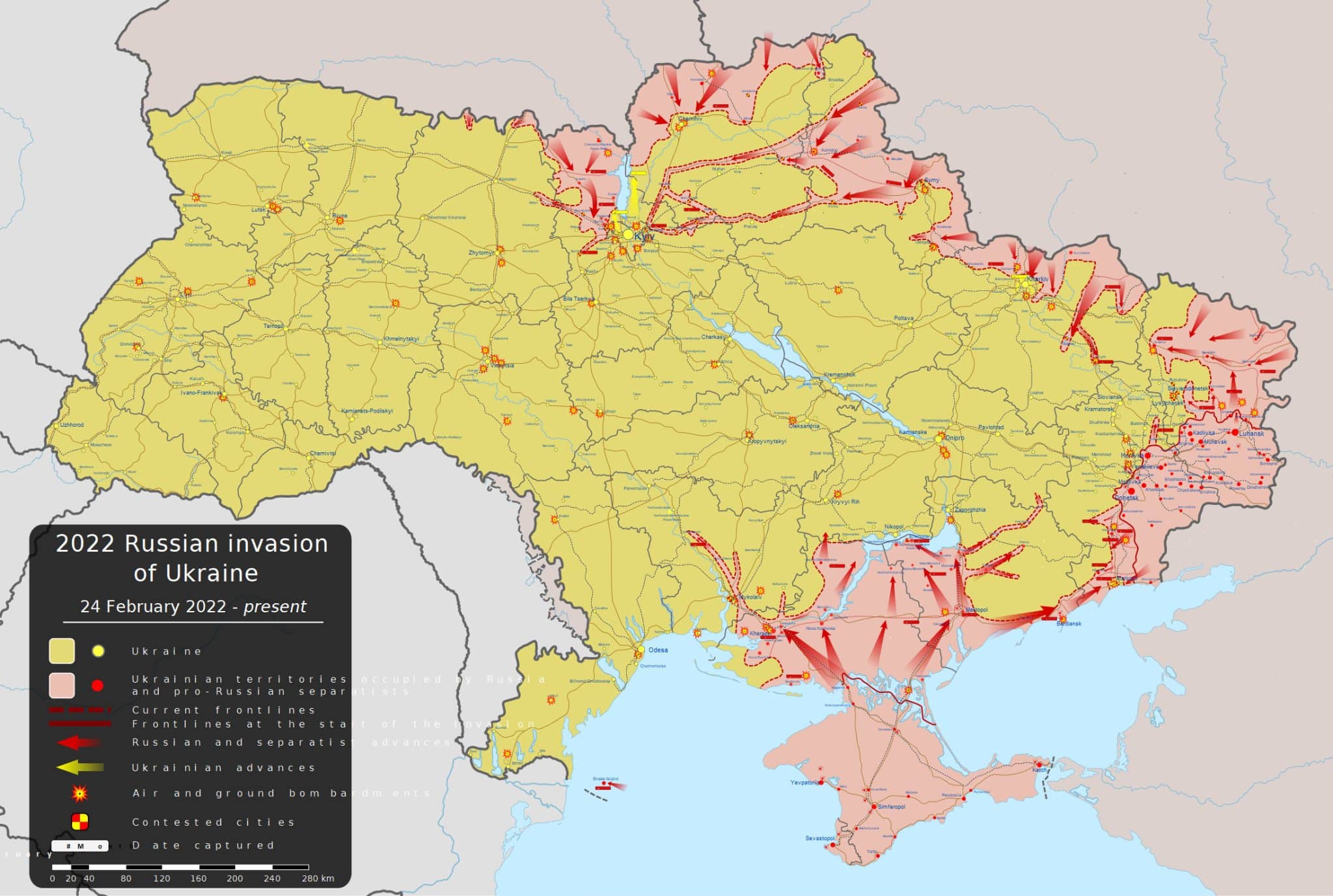 In addition to the cities, the Russians aim at conquering the Ukrainian nuclear power plants, with about fifteen reactors in operation, in order to control the electricity in the country. In short, we are talking about the vital ganglions of Ukraine whose control allows to disrupt the opponent's defensive system. Moreover, the choice to operate on several fronts and along multiple lines serves to put in difficulty the Ukrainian defenders, fewer in number, thus called to the difficult task of buffering more enemy offensives in numerical inferiority.

Now we must expect - indeed, we are already there - a time of rest and logistical waiting, in which the Russians will replace the front-line forces with "refreshed" second-stage forces. These troops will be more rested, with more modern and maintained weapons, and therefore with greater operational capacity. They will be confronted with the forces of the defender already worn out by the attack of the Russian first line and with no possibility of replacement.

The raid on Lviv

On March 14 a compound was hit near Lviv (west of Ukraine) where, before the conflict, NATO training activities for Ukrainian personnel were carried out. At the beginning of the war, officially, all NATO personnel left the base and went out of the Ukrainian territory (it seems, however, that Dutch personnel, who had returned or remained on the spot, were involved in the attack).

It was logical to expect a Russian attack there, where the Ukrainian military is trained to use the equipment currently sent by NATO (equipment that presumably, at least in part, was passing through that same base/area 20 km from the Polish border). The raid served to stop and/or slow down the influx of logistics and personnel to be trained, as well as to give a clear signal that anyone supplying weapons can be hit as soon as they enter Ukrainian territory. Above all, this shows the Russian ability to strike even in the Ukrainian rear at any time, including areas where the logistical activity of supplying weapons (some defined as lethal) from abroad and training reservists/mercenaries in support of Kiev is concentrated.

The situation in the Ukrainian skies

In modern warfare, air superiority - i.e. control of the airspace in the combat area - must be achieved before launching any ground operation. Despite the assertions of some analysts, Russia has achieved air superiority in Ukraine: otherwise there is no explanation for the continuous Ukrainian request for a no-fly zone. Before starting ground operations the Russian air forces have completely destroyed (or at least reduced to a state of complete inferiority) the command and control system of the air defense and the Ukrainian air force bases with their aircrafts on the spot. At the moment only Russian planes are flying over Ukraine.

Obviously, problems remain for the Russians. When their aircrafts descend to low altitudes to support the infantry, to be more precise in close-air support (CAS) bombing, they are faced with Stinger or similar missiles, capable of hitting and shooting down Russian fighter-bombers. The latter are using bombs that are launched from medium or low altitude, exposing them to the danger of the aforementioned MANPADS (short-range anti-aircraft missiles, which can be carried on the shoulder and whose training for use takes a few hours). However, there is no air battle between the fighters (MIG) of the two sides.

In their bombing campaign the Russians are deliberately keeping the Ukrainian infrastructure intact. The most important destructions (bridges in particular) would seem to have been carried out for defensive purposes by the Ukrainians. The Russian forces have not left the country in the dark, they have not destroyed the telephone repeaters and neither have they cut the fiber optic cables on which the mass of Internet connections travel. Plausibly the Russians, in a first phase, have sacrificed the needs of a (hypothetical) lightning war to the will of conquering a country with its vital infrastructures as intact as possible. In the very first days they privileged disabling cyber attacks to kinetic, destructive ones.

The Ukrainians have at their disposal the Turkish TB2 drones, already used in the Azerbaijani-Armenian war or in Libya. These are sophisticated drones with a great destructive capacity, which can destroy ground vehicles, columns or isolated tanks. However, we do not know how many of them there are, what the Ukrainian capacity to use them is and what their future logistic possibilities are. Certainly there are not many TB2 available to the Ukrainians and they require a certain know-how to be employed. It cannot be excluded that Turkish experts are present on Ukrainian territory. If Ankara should have decided to withdraw its experts and technicians at the beginning of the hostilities, it is possible that the Ukrainians, finding themselves alone to operate these vehicles, are not using them to their maximum possibilities. Finally, it must be considered that when TB2s return to base after an activity, they can be tracked by the Russians: the more they are used, the greater the chances that they will be detected. They also need space for maintenance, refueling of weapons and fuel. The more time passes, the more their operational capacity is reduced.

On a purely tactical level, there is no possibility for the Ukrainians to turn the tide of the conflict in the open field (to be clear: the same is not true in the urbanized area). However, given the determination shown by a valiant population of 40 million people, where the able-bodied men have not "fled the war", there is a possibility that the defenses can resist for a long time in the urbanized areas, inflicting such losses on the Russians as to exhaust their ability to advance. The imbalance of forces, however, is such as to affect the possibility of long-term defense: the Russians are sending on the ground new means, more modern, and new forces, also withdrawn from other territories - although there are possible difficulties in logistical supply and replacement of front-line troops. In this sense, the European commitment, which on the one hand supports the Ukrainians and on the other weakens Russia with sanctions, can offer Kiev some chances to achieve a favorable negotiated peace before its defenses completely collapse. Negotiations continue steadily, including online, and there is a big commitment from Israel (which hosts a large Russian diaspora but has a relationship with President Zelensky favored by his Jewish religion).

Domino effect: focus on North Africa and the Middle East

Every war produces a domino effect: consider the rise in hydrocarbon prices. The repercussions on North Africa and the Middle East of the loss of grain supplies from Ukraine must be considered. Europe has a system capable of absorbing the shock and compensating for the shortage, the countries of North Africa do not. The region could not handle a doubling (which is the minimum expected) of the cost of wheat and a food crisis would occur. This will provide leverage for Russia, once it has occupied the Black Sea coast. Europe, which has greater purchasing power, will try to grab what remains of Ukrainian wheat when production and export will resume. Turkey will take advantage of the Dardanelles passage to obtain grain or rich duties. Consequently, North African countries will have difficulty in obtaining supplies. An obvious difficulty in ensuring a sufficient and not expensive level of food in North Africa could cause revolts, internal instability and be the trigger for a new wave of illegal migration towards Europe, which would be added to the refugees from Ukraine

Finally, we must consider the need for reconstruction in Ukraine after the end of the war. We are talking about a country of 40 million inhabitants, urbanized and modern. The costs will be enormous and will probably weigh on Europe, whose citizens will be asked to pay a "overtax" for the reconstruction of Ukraine.