The hybris of mandatory vaccination

Forcing a single person or a community to undergo the inoculation of an experimental serum is to all intents and purposes a violent act, perpetrated to the detriment of those who, moreover, have monitored their health condition taking constant tests over time, preserving themselves and others from any form of contagion.

The so-called vaccinal obligation is therefore an expression of a prevaricator will of the will of others, will disguised by the call to a beneficial intent in the name of the community. Only the appeal to the values that have founded the West, Western culture, could have been a barrier to that violent will, translated into the aforementioned imposition.

The law as handmaiden of the strongest

Cultural, philosophical, ethical, moral, religious values that have always distinguished our immense civilization. But the constant, deliberate deconstruction of these values, the cancellation of every ethical and moral call, of every natural principle, "eternal", which has played over the centuries the function of embankment against hybris, pushes those who, even in the absence of a popular investiture, temporarily exercise power, to take measures that result in the imposition of their will, cloaked in scientificity, a hypothetical scientificity that shows at every step its inexorable fallacy.

Moreover, the substitution of natural law, ontologically anchored to "natural" values, with positive law, allows the latter to be bent to the contingent needs of those who exercise power, in the absence of any superior precept imposing its inexorable respect from above. Positive law as the handmaiden of the will of the strongest frustrates the very meaning of the constitutional charter of individual peoples, adapting even the "Grundnorm", at least its interpretation, to any choice, even of an impositive nature, exercised by those in power, determining the loss of its very binding nature.

With the disappearance of any absolute value, which imposes its respect in the very moment of acting, any omissive or commissive conduct can find its own contingent justification: no punishment for those who violate rules that no longer have an absolute character, with the effect that whoever finds himself even temporarily exercising a power, can do so by imposing his own will on others even in violation of their rights. As some philosophers say, in the absence of absolute values, every action becomes "innocent", as it responds to the will of the strongest, even if held to the detriment of the weakest. The exerciser of power justifies this exercise by invoking science, but not as an expression of doubt, but as faith in the postulates that justify the impositive action.

The silence of politics

All this takes place in the silent presence of politics, now inexorably on its way to sunset, unable to express its duty to represent citizens, enslaved, in most cases, to the exercise of power by the strongest. All this can not fail to worry those who have a minimum of democratic sensibility, those who strive to still glimpse the presence of values that exceed any temporal limit, able to impose themselves "naturally", as metaphysical entities, even to those who, blinded by hybris, claim to exercise power outside of any transcendent figure, values that indicate in the final analysis the limits of human action.

What is even more worrying, if possible, is the weakening of the so-called Greek "politicalness" caused by the absolute exercise of power. The weakening of politicalness is to be understood not only with respect to the management of public affairs - therefore as a renunciation by politicians of their duty of representativeness, which determines the worrying effect of the transition from democracy to forms of worrying oligarchy, also constituting the logical consequence of the cultural unpreparedness of most - but also and mainly in relation to the "political" sociality among citizens and people, in the absolute oblivion of the Aristotelian figure of the "politicon zoon".

The asocial man and the death of democracy

The choices consciously made in the last two years (choices that have repeatedly shown their fallacy) have determined the loss of this natural destination of man to the Community, together with the cancellation of the importance of the "agora" in which the individual person becomes aware of his ability to decide for himself, through public discussion. What is happening, with the conscious or unconscious complicity of many politicians, determines the loss of the sociality of man and his ability to decide his own interest, causing a tear in the social fabric that will be difficult to heal.

If politicians are not able to understand what is happening around them, the deep wound that the indifference and the unpreparedness of some, compared to the absolute and even violent action of a few, cause to civil life, to the aforementioned politicity, it means that they have abdicated their high function, recognizing their own uselessness. We could therefore say: welcome then the death of politics, but in saying this we must be aware that this death brings with it inexorably the death of democracy that has nourished our civilization.

I prefer, therefore, to hope for the advent of a new secular "katéchon" that will put an end to the season of hybris, reminding us all of the essentiality of those values that have distinguished the West, as a constant guide for human action. 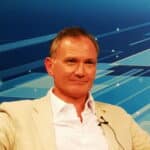 Lawyer based in Florence, expert in civil corporate law and criminal law and contracts. Graduated in Law at the University of Florence.