Poland will teach students how to shoot

Poland's minister of education, Przemysław Czarnek, recently enacted a law reforming school curricula to reintroduce, as early as September, basic courses in shooting and gun handling. A decision that has not sparked any particular protests in Poland but instead still scandalizes some Italian media, unaware (perhaps willfully) of the geographical and cultural necessities that make this decision not only necessary, but of example and common sense.

The aforementioned course, which already existed decades ago in Poland and is only returning in an updated form, is included in an expanded "security education" curriculum, which already includes courses on first aid and survival as early as elementary school, to which it is added in the long-term educational plan (and not replacing them, as erroneously reported by some Italian newspapers). Lessons in shooting and handling conventional weapons is done exclusively to high school students and through specialized instructors, using small-caliber pistols or replica weapons (such as air rifles) or even virtual shooting ranges, in complete safety and harmony.

The detractors of this choice, conditioned by cultural bias and lack of knowledge of the country, tend to give the distorted view of a militarism and bellicist delusion that would rage in the Polish government. A rather misleading view and distant from a reality that is radically different from that of Italy. 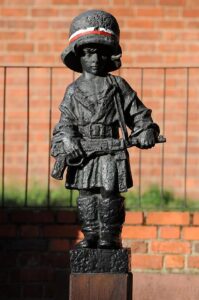 Statue commemorating child soldiers who fought and died during the Warsaw Uprising of 1944. Photo by Cezary Piwowarski, source Wikimedia Commons

To fully understand Poland's cultural roots, one must obviously start from the painful past and the never-healed wounds that characterize the Polish people's soul: those of the struggle for independence and self-determination. In 1795, with the final partition of the country, Poland's state existence ceased for the next 123 years, with its territory divided between the Russian, Habsburg and Prussian empires. A situation that persisted until the end of World War I with the establishment of the Second Republic of Poland. An independence that unfortunately soon ceased with the outbreak of World War II and the rapid joint occupation by the Nazis and the Soviets; with the former dedicated to the ethnic cleansing of the Jewish population and other minorities, the latter to the genocide of every Polish national élite (see Katyn Forest massacre). A yoke, the Soviet one, that would remain at least until 1989, with the subsequent withdrawal (not completed until 1993) of the 50,000 Russian soldiers present in the country to guarantee the stability of the various communist puppet governments teleguided by the Kremlin.

The key to interpretation, for those struggling to understand recent educational decisions, is the episode of the 1944 Warsaw Uprising: the desperate attempt by civilians to take back their capital city from the Nazi occupiers. Despite their training and equipment inferiority, the involvement of civil society in heroic resistance and a general mobilization that lasted 63 days at first put the Wehrmacht in such difficulty that Hitler was forced to reorganize the troops (which suffered losses estimated at up to 17,000 men). The Soviets intentionally stood by at the gates of Warsaw for 40 days on Stalin's orders, intervening only after the German victory and total destruction of the Polish capital in retaliation.

The idea of defending one's existence by all possible means, even in the face of situations that seem insurmountable; the fatality of events over which we have no control except the decision to organize and resist; the rejection of any compromise with dark-sided forms of values that threaten human dignity: these are the premises on which every person should question himself in order to finally understand the need to have a civil society always ready for any eventuality. Especially after the recent events in neighboring Ukraine that have rekindled fears of a global conflict.

Guns are not evil

These are the arguments necessary to understand that the education of minors, including in the proper use of weapons, has no propagandistic or bellicose overtones but, on the contrary, falls within the pragmatism necessary for civil and identity survival. It is an opportunity, which would also apply to Italy and its educational system, not to follow a sweetened and overly protective narrative line, with a tendency to demonize the means as such and not the wrong use of them; or the simplified and at times sugar-coated narrative of a world in which everything is solvable exclusively in a peaceful manner. On the contrary, it is a matter of accepting the dramatic nature of events often perceived as distant and alien to our everyday life, always finding oneself ready to defend their existence from any hypothetical threat, in a preventive form. Gaining the understanding that yes, violence and war are wrong, but in the face of a compelling threat they are unfortunately necessary and inevitable in order to be able to provide security for our loved ones and families.

It is not by chance, in fact, that at the start of the Russian invasion of Ukraine in February, volunteer requests for enlistment in Poland tripled, along with interest from civilians in purchasing weapons and practicing at firing ranges. Most Poles favor the return of conscription and an increase in military spending, as noted by several national statistical agencies. Despite this, Poland still remains one of the least armed countries in Europe, with an average of 2.5 firearms per 100 inhabitants (compared to 11.9 in Italy).

In conclusion, it is only by absorbing these premises that domestic commentators will finally be able to objectively judge the common sense and pragmatism behind this decision, avoiding trivial misjudgments that appeal to the reader's emotionality by exploiting the negative aura surrounding the gun issue and the excessive Italian tendency toward overprotective and at times anxiety-inducing education. 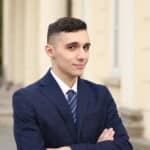 Giuseppe Adamo, a scholar of Central and Eastern Europe based in Poland, is a member of the foundation and school of political education "Służba Niepodległej," Graduate in European Studies (Catholic University of Lublin) and International Relations (University of Warsaw). Has previously worked for the Polish Ministry of Foreign Affairs.