U.S. military has a problem: It is struggling to find recruits

It’s national budget time in Washington, so the conversation on Capitol Hill is focused on numbers. But an important number is being overlooked, one that affects our ability to defend ourselves. At a time when threats abroad are growing, America’s ability to recruit the volunteers needed to fully staff its armed forces is on the wane.

The 2023 defense budget request just released by the Biden administration reduces the size of the Army by 12,000 soldiers. It isn’t that the Army doesn’t need those soldiers—senior leaders have consistently said the Army is too small. The reason for the cut is that the Army projects that they won’t be able to recruit enough people to meet their quotas.

Indeed, this year it’s possible none of the services will meet their recruiting goals. Only halfway into the fiscal year, the Army and the Navy recently raised their bonuses for recruits to an all-time high of $50,000, the head of Air Force recruiting told his recruiters “we have warning lights flashing,” and the Marine Corps is short recruiters because the recruiting business now is so difficult.

Perhaps we shouldn’t be surprised to see this at a time the government is reporting there are 4.6 million more open jobs than unemployed Americans looking for work. A shortage of restaurant workers is bad enough, but a manpower shortage in the U.S. military creates strategic risk for America at a time when threats are higher than they have been in modern memory. But the employment situation isn’t the sole factor. The recruiting crisis is the result of a “perfect storm” of multiple factors, all coming to a head in 2022.

With each passing year, fewer and fewer young people qualify for military service. Widespread obesity (36 percent for ages 18-39), increasing numbers of youth afflicted with mental health issues (26 percent of youth aged 18-25), and other issues including criminal records or lack of high-school degrees is driving down the percentage of youths qualified to enlist without a waiver.

In 2016 a Pentagon study reported only 29 percent of Americans age 17 to 24 were eligible to enlist. Multiple sources now report that number has dropped to below 25 percent. Another ironic complication: One of the Defense Department’s own new systems, the Prescription Medication Reporting System, is having the unforeseen effect of disqualifying large numbers of applicants due to new visibility into young people’s widespread prescribed use of psychotropic drugs. About 1 in 12 youth ages 12-17 are on such medications today.

But the larger issue with recruiting is that fewer and fewer Americans now see value in joining the armed forces. Young people typically join for either economic or patriotic reasons, or a combination of the two.

For those motivated by pay and benefits, companies like Amazon are offering packages that include pay of at least $15 an hour, fully funded college tuition, health care, and 20 weeks of fully paid parental leave. Conversely, a brand new Army private, assuming he or she works a 40-hour week (which is unlikely; most work 60+) earns about $11 an hour.

Those who might normally be inspired to serve anyway are likely deterred by the messages they are receiving today (or not receiving) from American society. A recent Gallup poll showed that between 2017 and 2022, Americans who believe military officers possess “high ethics” declined by a full 10 points, down to 61 percent, the lowest since they began measuring. The very public disaster that took place with the Afghanistan withdrawal further contributed to the public’s loss in confidence in the military and its leaders. For those who watch TV, young people can easily find fundraising commercials featuring veterans tragically wounded, but little in the way of the virtues of military service. Civic education in schools that emphasizes national service is missing in action. National leaders and role models rarely—if ever—discuss the value of public and military service.

Given all this, why would a young person choose the military today? In fact, most don’t. For the few that do, many come from families already “bought in” to service, children or families with veterans.

This trend carries great danger for America. To reverse it will not be easy. Pay and benefits must be re-imagined to be competitive with the private sector. The military, schools and society must do more to work with young people to help them overcome obesity and other qualification challenges. And President Joe Biden, his administration, Congress, and other leaders must do much more to portray military service as a virtue and an unqualified “good.”

This is not a transitory problem like a pandemic or one that will solve itself. We must take action. The alternative is a weakened and vulnerable America at a time when threats are on the rise. 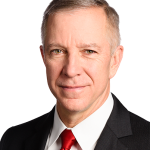 Director of Heritage Foundation's Center for National Defense. Served for over 36 years in the U.S. Army, attaining the rank of Lieutenant General. BA in Biology, MA in Public Administration and in Strategic Studies.