Most political parties would love the "problem" Democrats have with Black men: According to CNN exit polls, 79 percent of Black men voted for Joe Biden in the 2020 election; only Black women were more supportive of the Democratic nominee. But when a party assumes it is entitled to every vote within a certain demographic, it will treat even the slightest sign of defection as an emergency, and that's what you're seeing in Democratic circles when it comes to Black men defecting to the Right.

Biden himself said as much when he told a popular Black radio host during his 2020 presidential campaign, "If you have a problem figuring out whether you're for me or Trump, then you ain't Black." Some of his supporters went even further: one professor claimed Black men voted for Trump because they wanted proximity to the patriarchy and power structures, while a congressional candidate from Florida said one in five black men voted for President Trump because "they hate Black women."

The most recent iteration of this drama is playing out in Georgia, where there is concern on the Left that many Black men won't vote for Stacey Abrams. They are right to worry.

This "problem" that the Democrats have with Black men was observed more than half a century ago by Daniel Patrick Moynihan, then an assistant secretary of labor under President Lyndon Johnson. In his 1965 report, formally known as "The Negro Family: The Case for National Action," Moynihan predicted that equality in a post-civil rights era would be impossible for Black Americans because of two factors: racism for at least one generation after the Civil Rights Act of 1964, and the structure of Black families.

Moynihan famously focused much of his report on the problem of children being raised without a stable family structure. When the Moynihan report was published, 25 percent of Black children were born out-of-wedlock, which at the time seemed catastrophic. But by the mid-1980s, that percentage had doubled, and it has hovered around 70 percent since the mid-1990s. In 2019, nearly two-thirds (64 percent) of Black children were living in single-parent households.

But another equally important finding in the report was that within many Black families, the roles of men and women were reversed. Moynihan argued that the Black community was locked in a matriarchal structure that imposed a "crushing burden" on Black men while also depriving them of the authority they needed to lead.

This it turned out was a crucial insight, though like the rest of the report, it has been ignored. Moynihan's characterization of Black family dynamics as a "tangle of pathology" led liberals—then and now—to dismiss the entire report as a racist attempt to blame Black people for their social condition.

The truth is more complex: Many Black men, then and now, do an admirable job of providing for and protecting their families, but there are also entire neighborhoods in some cities where it is rare to find a Black child living in a home with his married biological parents.

For the most part, women in these communities are married to the government, at both the federal and state levels, which plays the role of husband and father. Democratic elected officials and unelected bureaucrats promise and provide food, shelter, health care, and childcare to millions of low-income Black women and their children.

But while this began as a solution to certain problems within these communities, it has had the unintended effect of exacerbating them. The Democratic Party's subversion of male responsibility and authority within the home has made it increasingly antagonistic toward men and the traditional family structure. President Obama was routinely criticized by his liberal Black base whenever he promoted marriage and fatherhood in speeches to Black audiences. And since then, those progressive critics have become the official voice of the party: The 2020 Democratic party platform did not contain a single reference to the importance of marriage and the nuclear family.

The Left's detachment of parenting from marriage is not confined to elected officials. Most people associate Black Lives Matter with criminal justice reform, yet none of its 13 founding principles mention police brutality. The co-founders were clear, however, about their desire to "disrupt" the nuclear family.

The media has joined hands with activists and the Democratic Party in this regard, too. Several years ago, an MSNBC roundtable discussion featured three Black professors who dismissed people advocating marriage and responsible fatherhood as believers in the "magical Black father myth," while Hall of Fame NFL coach Tony Dungy was harshly criticized for appearing with Florida Gov. Ron DeSantis in April to promote a responsible fatherhood initiative.

Democrats and their media supporters are not completely misandrist; Black men who identify as part of the LGBT community are welcomed allies in the Party's war against traditional masculinity. But Black heterosexual men who are given a platform must demonstrate fealty to the matriarchy and radical gender politics.

Thus, New York City Mayor Eric Adams declared that drag queens are an integral part of the education of schoolchildren. Louisiana senate candidate Gary Chambers told young Black men at an HBCU they should support abortion on-demand. Like his female counterparts, he promotes the destruction of Black life in the womb with much more passion than marriage and stable family formation.

Given all this, it might be surprising that only 20 percent of Black men have defected to the Republican Party, which can only be explained by the Democrats' claim to be the only viable party on race; the Left sells itself as the guardian against the ever-present threat of Jim Crow (and his offspring—James Crow, Esq., Jim Eagle, and Jimmy Crow). The cynical manipulation of America's bloody racial history for the sake of political loyalty—a phenomenon I call the "Selma Syndrome"—is one of the strongest forces holding Black voters in place right now. But BLM's alleged financial mismanagement helped many Black men realize that our deaths are being used as raw material for the Left's pursuit of political power and financial gain.

Democrats can feel their grip slipping. People who use their platforms to decry masculinity can't also claim to care about men. The Moynihan report included a quote from Dorothy Height, former president of the National Council of Negro Women, that still holds true today:

If the [Black] woman has a major underlying concern, it is the status of the [Black] man and his position in the community and his need for feeling himself an important person, free and able to make his contribution in the whole society in order that he may strengthen his home.

An MSNBC host recently admonished Black men who are reluctant to support Stacey Abrams to "get in line" behind the Black women who do. This has been the Left's perspective for decades: Black women lead; Black men follow. But in this world where Black women don their capes to "save democracy," Black men are relegated to damsels in distress.

No wonder we're defecting. Many of us want to build and lead families of our own, not be mothered by women who didn't birth us. 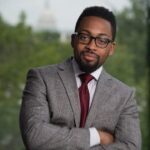