Ignorance and inequality: the damages of the progressive school

The book by Mastrocola and Ricolfi

The "democratic" school has resulted in a general lowering of the cultural level, which makes it fail in its mission of giving the necessary cognitive tools to its students. Lowering the bar, far from helping the children of the lower classes, as its promoters hoped, has instead condemned them to frequent failure, while the scions of wealthier families can catch up with private lessons or, at worst, count on the relational network of their parents to occupy the highest levels of the social pyramid. In short: progressives have built a school that produces ignorant people and that, moreover, increases social inequalities.

This thesis is not new: writer and retired teacher Paola Mastrocola has been repeating it for years. She has also written a couple of valuable texts in which she denounces how "progressive" schools clip the wings of the best. The novelty is that in the new Il danno scolastico. La scuola progressista come macchina della disuguaglianza(The school damage. The progressive school as a machine of inequality), Mastrocola, writing together with sociologist Luca Ricolfi, succeeds in mathematically demonstrating the thesis.

The data used are those of ISTAT, to measure the social level of children and their fathers, and those of the INVALSI tests, which give a measure of the value of teaching in a school. The model for testing the starting hypothesis is the brainchild of Ricolfi and his Hume Foundation.

The numbers of inequality

The first result observed is that the generation of boomers benefited from an increase in the availability of high positions: most were able to improve their social status compared to that of their starting point (i.e. their fathers). The turning point came in 1977: those born after that date enjoyed fewer opportunities than their fathers. Since 1990, in fact, there has been a reduction in the middle-high positions available in society: in other words, the social elevator has been blocked.

However, what the authors want to verify is primarily the openness of society, that is, the equality of opportunity between the upper and lower classes. The data reveal that the children of the upper classes have four times the chances of success (i.e. of finding themselves as adults in a high socio-economic position) of the children of the lower classes. All other conditions apart from the family (same age, educational qualifications, etc.) being equal, the gap is 2.6 times.

At this point, Ricolfi (who authored the mathematical portion of the book) moved on to examine how the quality of education relates to social openness. He noted that as the quality of education increases, there is a corresponding decrease in lower class disadvantage. In order to rule out the possibility that this depended solely on contextual well-being (i.e., that the quality of education acted as a proxy for GDP), he refined the analysis further (for details we refer to the book, which also hosts a technical appendix). The result is that attending a good school increases the chances of success by 16-35%, attending a bad one decreases them by 14-26%. All else being equal, the school attended can increase the chances of success by up to 1.8 times. Speaking of inequality, bad schooling widens it: the advantage of the child of the upper class grows from 2.6 to 3.7 times.

A "democratic" school that disadvantages the poor 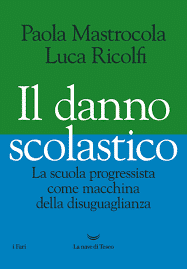 Given these numbers, some might wonder why a rich student is less disadvantaged than a poor one by attending a bad school. It's easy to say: because quality education is one of the few means by which a child from a lower class can mitigate the impact of social origin and compete with a child from a higher class. If the school does not give tools, does not really form, then all other socio-economic factors prevail, which, of course, favor those born in a better position. Forget about pursuing meritocracy: that would have been done with prizes, scholarships, access to university courses on the basis of one's school career - explains Ricolfi. What progressives have done, instead, is to pursue mass schooling - quantity - even if this meant lowering the bar - quality - and, ultimately, giving the poor one more piece of paper but fewer opportunities for social promotion.

The politics of cognitive impairment

Although the analytical and demonstrative part represents the most important part of the work, Il danno scolastico also offers two large and interesting chapters of testimony, one written by Ricolfi and the other by Mastrocola. Both of them chronicle their own journey through the educational system - first as students, then as teachers - showing in an empirical way how school deterioration occurred. In their recollections we relive the various school and university reforms: the unified and simplified middle school (1963), the less selective high school exam (failures have gone down in a century from over 40% to less than 1%), university courses without entry requirements and with flexible curriculum (1969), the "3+2" and the doctrine of the "right to educational success" (2000), up to semi-courses and "exemptions" to reduce the amount of notions to memorize or, on the school side, to the "school of skills" instead of knowledge (2007). And the two authors bear witness to the end result of these reforms: the abundance of university students capable only of elementary thoughts and with a mastery of Italian as a non-native speaker. Young people who have lost their critical cognitive periods: precise developmental stages in which it is necessary to learn certain skills and habits, or else never learn them and be left with unbridgeable gaps.

The Right? It is certainly not innocent

There is one last point made by Ricolfi and Mastrocola that deserves to be reported, all the more so here. The disaster of the "democratic" school is the responsibility of progressives. They were the ones who led the game of reform after reform, one new pedagogical practice after another, demonizing and isolating all those teachers who opposed school decline. But the facilitated school is the result of an evolution of the collective mentality (that of the school not as a place of education but of "socialization" and "entertainment", that of the school that must never hold back), which the Left has exploited and which the Right has never opposed. When the Right has been in government, it has never changed course. On the contrary, at times it has even accelerated, as did Gelmini, Minister of Education from 2008 to 2011, guilty of having introduced the "bibliometric" evaluation of university teachers. A hyper-bureaucratization of universities that has shifted all attention to the fetish of publications, totally ignoring the role and quality of teaching. A standardized and obtuse evaluation, which has punished any wide-ranging and long-lasting research in order to reward editorial bulimia: it is better to have many superficial and dull articles in "accredited" journals than a revolutionary book, perhaps capable of influencing world thought and culture. As in the worst Soviet practice, the evaluation has become itself the aim of those who were evaluated, informing to its abstruse and reductionist criteria all their work.

The Right is no less responsible than the Left for this disaster. If the school is poor and the new generations unprepared, the fault is also its own. Now it has the duty to try to remedy it.