In spite of what the subtitle might suggest, this is not a book dedicated to political practice so much as to theory or, one might say, "spiritual" training. Reflecting on the most basic values, the fundamentals, it makes us understand how the choice of our lifestyle is a political choice. In this sense, it provides "good living" directions to readers.

Borgonovo is used to choosing battles that are difficult to fight: we realize this when we watch him on television, proudly defending positions that are constantly put in the minority by the authors and opposed by the other guests. Not even in Conservare l'anima does he deny himself: the book is, essentially, a demonstration of why "God, Fatherland, Family" must be the reference values even in our times. This is a courageous choice, considering that this triad is not only demonized by the adversaries, but even in the field of the Right it is often looked at with detachment, if not openly mocked, as something ancient and therefore obsolete, outdated.

Mechanism of the Liberal State

Borgonovo explains that if God, Fatherland and Family are so ostracized today, it is precisely because they are the antithesis of the current system. God was expelled from this system by classical liberalism centuries ago, et pour cause: we were coming out of bloody religious wars and the desire was for an axiologically neutral State, in which people could live together without slaughtering each other. However, in this "neutral" state, politics ended up being replaced by objective processes, which governe in a mechanical way: the market and law. From the government of men, it passed to the government of things.

According to the Author, this system, in which the State renounces to indicate the "right path", was suitable at the dawn of capitalism, when the community still shared the same values. Today, however, we live in the era of deconstruction, which has demolished those values and moved the debate on the good from philosophy (where liberalism had relegated it) to jurisprudence. Law now dominates over politics and every social bond has become contractual. 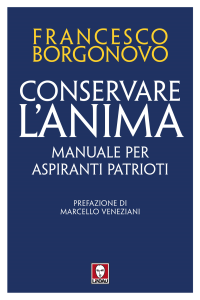 In opposition to this "marketist" vision of existence, Borgonovo opposes the cultural tradition founded on the "gift": of objects or of oneself. The gift is a means of establishing a reciprocal moral obligation, which does not end with the fulfilment of an agreed duty, but remains in place as long as the two subjects survive, guaranteeing help and solidarity. The gift of self is also the basis of the family: parents give themselves to their children to raise them, and children give themselves to their parents to perpetuate their lineage.

From family to nation the step is short. Each individual contains within himself the multitude of those who have preceded him: he has, namely, a fatherland. The feeling of gratitude towards the ancestors is what keeps a nation alive. Whoever shows pietas towards the fatherland perpetuates the lineage and transmits its founding values (the tradition). The sense of tradition is to take root, to preserve and increase the heritage. Concretely, it is transmitted in the family, as a living force, through the overlapping of generations.

The evil of a utilitarian society

The opposite is individualism in the worst sense of the term: the person who feels disconnected from his ancestors as well as from his posterity, who refuses any duty towards his own lineage. Unfortunately, Borgonovo explains, the family logic of ties and gratuitousness clashes with the logic of free choice and maximum profit proper to capitalism. A logic that has permeated our entire life, not only the economic side. For example, love has become a chaotic and consumerist free market. The obsession with individual affirmation makes it difficult to build a family, to which one must give a large part of oneself in a lasting way.

Another example proposed by the Author is that of procreation. If procreation is no longer experienced as a duty but as a choice, no longer evaluated as a natural fact but as a decision to be weighed rationally, it goes without saying that the reasons for "no" will prevail: too many sacrifices, costs and efforts. What is also missing is courage, the virtue that makes it possible to practice all other virtues; the virtue necessary to choose to build a family. The virtue, alas, rejected by economic logic, for which material well-being is the supreme good.

Finding the father again in a feminized society

Very interesting, in the book, is also the part dedicated to the role of the father and the mother in the formation of children and, consequently, of society. According to Borgonovo, the father has the task of separating the son from the dyad with the mother, in which he is everything and has everything. The crisis of the father figure generates, as a result, unbalanced, spoiled, narcissistic, dependent and ungrateful individuals, who perceive all their desires as "rights" and avoid any duty. This obviously affects society. We can see this in the capricious "anything-is-my-right" logic that prevails, of course, but also in the constant search for a State that takes care, to which they abandon themselves as completely dependent subjects. The way in which domination is exercised changes accordingly. The patriarchal form of domination dictated an external obedience to the law: the father traces a perimeter, but within that one is free and autonomous. The matriarchal form of domination, on the other hand, is all-encompassing and demands not mere obedience, but the unconditional love of the subject.

Revolution against the modern world

Totalizing and totalitarian is the power looming on our lives. This totalitarianism needs to be countered by barriers. The main one, Borgonovo tells us, is the family, which transmits knowledge, culture and a sense of community. This is why totalitarian power attacks it: to destroy tradition and, with it, the models and archetypes that allow us to dissent and imagine other worlds. The "freedom" that we are granted today is the one that a rich mother gives to her capricious son. The system exalts the figure of the "rebel" because he is the irresponsible, unsociable and selfish individual: exactly what the system wants to create.

To the rebel, Borgonovo opposes the revolutionary. He who acts for his community and fights not to destroy, but to erect a new order. He who has the courage, indeed the heroism, to put himself at risk (the opposite of the current cult of "zero risk").

Conservare l’anima is an excellent spiritual manual for those who want to be revolutionaries. It teaches, among other things, that it is not enough to conserve but one must know how to defend: literally, to repel the enemy. In politics, to be able to oppose a counter-narrative, an alternative vision of the world. According to the old adage: the best defense is a good offense.