The Time To Resist Vax Passports Is Now

I had Covid over Christmas break, after my triple-vaxxed husband brought it home from a conference, which means two things: I now have natural immunity, and you will never persuade me that vaccinated people don’t spread the virus to others.

That was supposed to be the rationale for vaccine passports. If vaccines prevented the spread of Covid, then there might be value in giving people the peace of mind of knowing their local cafe or museum or office building was a safe space where nobody would infect them.

Now that vaccines turn out to be better at protecting yourself than protecting others, the rationale for making them mandatory is dissolving. And yet this is the exact moment when cities across the country are launching their own vaccine passports.

The mayors of these cities don’t even pretend to have a good rationale for launching vaccine passports now. Reading their public remarks, the reasoning seems to be that the more they harass the unvaccinated, the higher their city’s vax rate will go. Invocations of “protecting others” are rote, with no explicit suggestion that vaccinated individuals don’t spread the new, highly contagious Omicron variant.

Once Americans get accustomed to scanning a QR code every time they enter a building, there is no limit to the surveillance and nudges that can be built on top of it.

There would be a record of where you went and who you were with any time you went out to a bar. Right now you have to show ID to drink, which some people think is equivalent to showing proof of vaccination. But the police can’t call up the bar and ask for a list of everyone who was on the premises last night. Under a vaccine passport regime, providing such a list would be as easy as pointing and clicking. Australian police have already used data from QR code check-ins in criminal investigations. This suggests they get some level of surveillance out of it beyond what they had before, even with cell phone location tracking and other digital footprints.

It would be very easy for apps like CLEAR Health Pass to build social credit systems on top of vaccine passports, rewarding certain behaviors and penalizing others—all the more so because they are private companies. Politicians from the Biden White House down have been eager to delegate vaccine passport apps to the private sector, possibly with an eye to insulating themselves from legal challenges. Imagine today’s debates about whether Twitter and Facebook are free to penalize any user they like or whether they have obligations as the new virtual public sphere, but about the actual public sphere. That’s what will happen when every storefront is plugged into the CLEAR or VaxYes ecosystem.

The tech sector has its own reasons for salivating at the prospect of a vaccine passport. Data is the new gold, as the saying goes. Vaccine passes offer an unprecedented opportunity to collect data and, more importantly, to sync up a person’s data under a single digital profile.

In his recent book on modern China, David Goldman records a conversation with a Chinese banking executive who bought data from telecom companies in order to target ads. “If you have walked by an auto dealership three times in the last few weeks, we send you a text advertising an auto loan,” he said, adding, “We wouldn’t be allowed to do that in the West.” The possibilities for this kind of digital tracking are endless, whether for companies that want to sell you things or for government busybodies that want to control your carbon footprint.

Vaccine passports were first trialed in San Francisco and New York City. The fact that they went into effect relatively smoothly, without provoking a revolution in either city, is the number one factor emboldening other mayors to adopt them.

The only thing that will stop vaccine passports from spreading further is if the system stops working smoothly. If bar and restaurant patrons stay away, if music and sports ticket sales decline, if businesses refuse to enforce this discriminatory system until legal challenges are heard. My husband suggests that residents of Washington, D.C., should protest the vaccine passport when it comes into effect on January 15 by taking our restaurant dollars across the river to Virginia. (Weird excuse for a date night, but I’ll take it.)

When Gov. Jay Inslee of Washington tried to put in place a contact tracing system that recorded the name and number of every individual who walked into an indoor dining venue, he backed down after popular outcry. Digital vaccine passport apps are a much bigger threat to personal privacy. There needs to be that kind of outcry again.

It will be no consolation if vaccine passports are only implemented in a few blue cities. The Soviet Union’s internal passport system was confined to major urban centers like Moscow and St. Petersburg, plus border areas and other militarily sensitive zones. The regime focused on the areas it was important to control and let the rubes in the hinterland do whatever they wanted—at least until 1974, when universal internal passports were extended to rural residents. The geographic limitation did not make the system any less tyrannical or any less effective at marginalizing dissidents.

The sad thing about Soviet internal passports is that they were popular. When they went into effect in 1933, in Moscow alone, over a million people were forced to leave the city because they were not granted an internal passport, without which they could not obtain employment or register their children for school. An internal party communique listed the following responses from workers to the new system, as quoted in Albert Baiburin’s new book The Soviet Passport: The History, Nature, and Uses of the Internal Passport in the USSR:

The sad thing about Soviet internal passports is that they were popular. When they went into effect in 1933, in Moscow alone, over a million people were forced to leave the city because they were not granted an internal passport, without which they could not obtain employment or register their children for school. An internal party communique listed the following responses from workers to the new system, as quoted in Albert Baiburin’s new book The Soviet Passport: The History, Nature, and Uses of the Internal Passport in the USSR:

“It’s good that they’re bringing in the passport system. That’s how we will get rid of the criminals.” —Yegorov, worker at the Borets factory

“It’s important to work and not be a parasite. The Soviet authorities are right not to give passports to parasites and lazy swine.” —Farm worker from the Moscow region

“Kharkov is a major industrial center, with a millionstrong population. Here, people who are totally opposed to the building of socialism have made themselves a cozy little nest. Criminal elements with no creative talents have wormed their way into our institutions. The passport will reveal the true number of Soviet citizens.” —White-collar worker from the ‘Daily Life and Labor’ cooperative

“It’s about time they introduced passports. It’s a great way to clean the dirt out of the capital.” —Stadnik, worker from the ‘Hammer & Sickle’ factory

Notice in the quotations above how seamlessly people slide from the intellectual case for passports—keeping antisocial elements out of sensitive regions—into an emotional hostility toward “parasites,” “lazy swine,” “criminal elements,” “dirt.” Passports encourage hatred and dehumanization, implying that certain people have no right to even exist alongside the rest of us. At a time of unprecedented political polarization, that is the last feeling that should be encouraged. 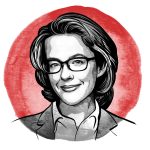 Senior Editor of "The American Conservative". She has worked for numerous American publications and the Centre for Independent Studies in Sydney, Australia. She holds a degree in Religious Studies from Yale University. Her articles have appeared in various newspapers, including "The New York Times" and "The Wall Street Journal". Her latest book is BOOMERS: The Men and Women Who Promised Freedom and Delivered Disaster (Sentinel, 2021).